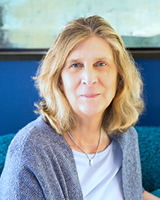 Deborah Bonem graduated from Macalester College in 1969 and then received a Master’s of Social Science Administration from the Mandell School of Applied Social Science at Case Western Reserve University in 1975. She graduated from the Cleveland Psychoanalytic Center and became a certified psychoanalyst in 2006. Deborah has worked in private practice for more than 30 years. She was affiliated with Psychological and Behavioral Consultants from 1991-2013. She became a founding partner of Partners for Behavioral Health and Wellness in 2013. Deborah received training in family therapy at the Chicago Family Institute in 1977 as well as participating in Family Therapy Seminars from 1977 to 1980 at the Family Life Clinic in Lansing, Michigan. She was also trained in the Bion Group Model at Michigan State University. She received training in child psychoanalysis with Catherine Berwald at the Children’s Aide Society in 1975-1976. Her interests include individual psychodynamic psychotherapy, family therapy, marital therapy, and psychoanalysis.

Deborah is a consulting psychologist who is no longer accepting patients.

Back to Our Staff